Home / All Posts / Attorney / A Legal Defense Attorney in Redding, CA Might...

A Legal Defense Attorney in Redding, CA Might Be Right For You 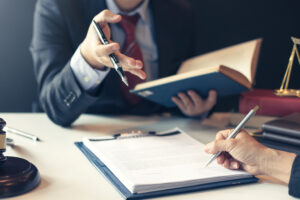 Many people tend to believe that traffic tickets don’t have serious consequences following a conviction, because they aren’t necessarily a criminal offense. When all factors are considered, this belief is far from the truth. Tickets can lead to suspension of driving privileges in some situations, especially when demerit points are already present on a driving record. Multiple offense convictions can also mount up points that could contribute to a suspension at a later date with any subsequent charges. Traffic tickets can indeed be problematic, and many times it is best to retain an experienced attorney for a traffic ticket. Legal Defense Attorneys in Redding, CA have the ability to investigate the case and craft a strong counter claim for presentation to the court.

Ramifications of a Traffic Ticket Conviction

Traffic tickets can be very serious for professional drivers who will see a significant increase in their insurance premiums or possible employment termination in certain instances. Technically, a DUI is a type of traffic ticket even though it can carry jail time and a license suspension. Commercial drivers are also held a stricter standard, and citations associated with an accident for any driver can be used as evidence in a civil action. Accumulated demerit points also stay on a driving records for several years in California for all drivers, all of which can possibly be limited with effective legal counsel focusing on traffic tickets in Redding CA.

What a Traffic Ticket Attorney Can Do

Individuals who have been cited for a driving offense have very little authority to investigate a case. The word of the officer is essentially as good as gold to the court and their testimony and judgment claims are rarely questioned. A cited driver will always have little success at arguing against the officer’s claims. However, an attorney is an officer of the court as well and can cross-examine the citing officer concerning details of the incident.

Traffic tickets are typically handled similar to criminal charges in most courts, which would mean that the negotiation process before going to court is where most cases are settled. Your traffic ticket attorney can discuss case particulars with the prosecutor in many cases and come to a more acceptable citation adjustment or even a dismissal when material case factors are in your favor. Some cases can even be deferred to a specific time depending on the evidence, and court costs can even be avoided when fines are paid prior to going to court. All cases are unique in some fashion, which can affect the final outcome when negotiated by an experienced legal defense attorney.

Never assume you have no defense when being issued a traffic citation of any type. Remember that you have to option to consult with a legal defense attorney in Redding, CA who will know how to build a solid case for maximum reasonable doubt in your defense.